Delight yourself in the LORD and he will give you the desires of your heart.
Psalm 37:4

This morning I find myself sitting alone on a balcony in Key West looking out over the water and feeling totally overwhelmed by the blessings of God.

As I sit here contemplating the fact that as a child I never even dreamed of visiting so many of the places I have been blessed to see and experience, I am truly overwhelmed by His goodness and love for me.

He created me to have a deep love for nature and a desire for adventure...and He is giving me opportunities to do those very things.

He has blessed me with a wonderful and supportive husband who is not only 'okay' with me taking these adventures, but encourages me to do so -- both with and without him.

He has blessed me with dear friends that have become like family and who are a blast to travel and explore the world with. Let's be honest, there are not a lot of people that you would want to spend five days with in close quarters.

He has blessed me with a job that allows me these little getaways without sacrificing time away with my family later in the summer.

And there are so many more...I just want to give Him glory today.

I pray that He would help us all to more readily recognize the many times that He just flat out SPOILS us with His goodness and love for us.

Shalom from the Florida Keys!


- Posted using BlogPress from my iPad

Links to this post
Labels: 1000 Gifts, Faith, The Travel Page

Oh, All The Things I Have Missed!

Once upon a time, when I was a young girl, the days they passed so slowly that I thought the week would never end...and Christmas would never come...and my birthday most surely would take F.O.R.E.V.E.R!

Now, I just wish the days would slow down long enough for me to breathe in and reflect on the goodness found in those very fleeting moments.

The thing is, things aren't really any crazier than they have ever been.  But the combination of a lot of things has me feeling like I am very, very busy.  (I really dislike that word.  It sounds so self-important.)  The economy seems to be recovering and that means work is picking up.  Plus the beginning of the year means a lot of paperwork for me between the W-2's, the 1099's, the fourth quarter tax filings and the audits we undergo for our insurance policies. Then there is the Tuesday night Bible study I am attending with friends at Houston's First Baptist.  I haven't been able to participate in a few years, but I was determined to do so this year.  After all, I have taken flights to far away cities and stayed in hotel rooms to hear Beth Moore speak before...I feel like getting to hear her wisdom eight weeks straight for the cost of gasoline and a little of my time is a bargain!  Then there are the life events that our family likes to celebrate and enjoy.  Icing on the cake!

Here are some of those life events that I have failed to clue you in on in 2013: 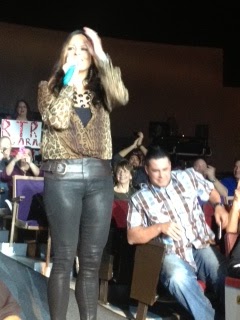 Robin and I went to see Sara Evans in concert at The Arena in Houston.  It really was a good concert and the seats were wonderful.  Truly not a bad seat in the house.  And thanks to Robin's great 'concert seat intuition', Sara walked right past our seats on her way on and off stage.  Really, I do not know how she does that!  Oh, and if you go to Sara's fan page you can see Stacy's husband, Albert.  He had a meet and greet pass.  His picture is the second one down on the left!  Fun, fun, fun!  (We are going back in May to see Trace Adkins!) 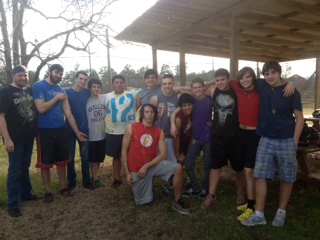 Will celebrated his 18th birthday with a day of paintball with friends and family.  The guys had a great time while Bri and I watched.  There was no way we were going into that melee! 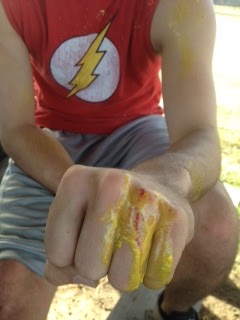 Yeah, I didn't know you were supposed to bleed while playing!

And really, this was nothing compared to some of the bruises these guys had!  Josh and Brian held their own for being the old guys on the field!

February 1:
Will and I spent the afternoon having his Senior Portraits made.  Can't wait to share them with you!

February 2:
The family gathered at Kelli and Matt's for Maddux's 4th birthday party.  It was a Star Wars theme party -- the food, the games, the presents...all in theme.  You can visit Kelli's blog to see pictures from the party.

February 3:
Our sweet baby girl turned 29!  How in the world did that happen? 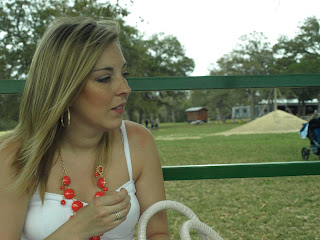 We celebrated with an early lunch at one of her favorite restaurants, Alicia's.

That evening we had the whole family (except Josh who was on the boat) and a few friends over for a Super Bowl Watch party.  Much fun was had by all.  Well, except for the 49er fans who did not enjoy the end of the game too much!  LOL!

February 8:
We went to the Houston Improv to see John Caparulo perform.  For the most part he was pretty funny. 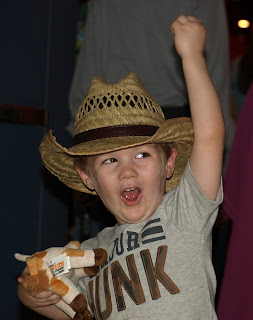 Maddux turned 4!!!  He told Kelli that Nonna, Pappaw and his uncles were coming over to have another birthday party where he would turn 5.  Slow down, buddy!  Nonna already thinks the days pass too quickly.  Let me enjoy your 4th year before we head off to 5!