The Gift of a Memory

I think I've mentioned here a time or twenty that I have a really bad memory.  It is one of the reasons that I started this blog.

Don't worry, I haven't been diagnosed with anything.  It is just that with five children and now six grandchildren, sometimes events run together for me.  So I record them here so that I can refresh my memory from time to time.

BUT...there is one memory indelibly lodged in my mind.

My mom worked at Boyd & Nichol's General Store in Fountain Hill, Arkansas.  She was a butcher there at the time.  (This was before she started nursing school.)

Boyd & Nichols was a true general store.  About half of it was groceries, but the other half had anything you could imagine...shoes, overalls, tools, implements, farm supplies.  ANYTHING!

During this one week in June of 1978, I was offered the temporary job of sacking groceries.  You see, the regular 'sacker' was out of town for the week attending FFA camp.  (Future Farmers of America...though I believe he works for the Ashley County Sheriff's Department today, not on a farm.  But I digress.)

So, this was my first paying job.  A one-week stint at sacking groceries at a general store.  I was quite excited by the prospect of earning my own money...and even more excited that it was a one week only job because, really, who wants their entire summer interrupted by work?  (Oh, the irony of wasted youth.)

I really can't tell you much about that whole week.  I don't know how many sacks I filled and carried out or how much time I spent stocking shelves.

BUT...right around lunch time on my last day (Saturday) I had an experience that I have never forgotten.

I had sacked groceries for a woman and was carrying them to her car just out front of the store.  As I approached the car I noticed two boys with her.  I'm sure they were not with her in the store...but they seemed to have miraculously appeared as we walked toward the car.

One of them was a few years younger then me, very talkative and friendly.  The other one looked near my age and was quite handsome.  The older brother opened the back door of the car for me as I moved the groceries from the shopping cart to the backseat.  I remember giving him a hard time about letting me, a girl, do the heavy lifting of a very large bag of dog food.  And then, he closed the door, walked around the car, climbed into the driver's seat and was gone.

I'm sure it was a scene that had played out several times with many different people throughout that week's worth of work.  But for some reason I never forgot his face, the way he spoke or his reserved friendliness.

Fast forward just short of two years when I met him again and learned his name.  Jim.  Jim Goode.  Yeah, the one I have been married to for almost 33 years now.  (Our anniversary is next month.)

I've always wondered why THAT memory remained so vivid to me for all that time.  (Admit it, two years is a long time when you are a young girl.)  And why it still remains so rich today.

But earlier this week I was reading Melanie Shankle's book "The Antelope in the Living Room" and I came across this quote which just really says it all for me.

"It's shocking the things I don't remember from college, but I remember every minute of that first meeting. I remember what he said and what he prayed, and looking back, I think it was God's gift to me because he knew this man was going to be my husband and there were things I'd want to remember."

Melanie Shankle AKA Big Mama
"The Antelope in the Living Room"

That crystal clear memory from 1978 was a gift from God for me...because He knew I would want to remember it.  He knew it would be a treasure for my heart.

Oh, and the reason I bought the book?  (Aside from the fact that I have loved her blog for years.)  Did you see that kudu mount on the cover?  Yeah, I have a similar one hanging in my living room right now.  Only ours has a blue wildebeest right across the room to match.

- Posted using BlogPress from my iPad
Posted by Fonda at 8:30 AM 1 comments

Links to this post
Labels: Entertainment: Book Reviews, My Hero, On Being Fonda

Links to this post
Labels: Holidays, Little Willy, My Hero, The Royal Family, This Little Piggy

Our family gathered last Saturday to celebrate our Risen Savior with a big meal and an egg hunt.  And honestly, I took not one photograph...but Brianne did.

So, I'm cheating and taking the photos from her Facebook page.


Not sure why there are no photos of Will...but I promise, he was there!

We enjoyed a large Easter dinner followed by the Adult Easter Egg Hunt due to conflicting nap schedules.  Finally, around 4 o'clock we were able to get everyone up and alert at the same time for the Kids Easter Egg Hunt.  Later in the evening we spent a couple of hours playing a nine person game of Liverpool Rummy.  Yeah, that was an exercise in patience!

Hope y'all had a Happy and Blessed Easter!
Posted by Fonda at 4:08 PM 1 comments

Links to this post
Labels: Holidays, My Hero, Number 1 Son, The A Team, The Royal Family, This Little Piggy

The Beauty of Spring

I love wisteria. Absolutely love it.

I don't have any planted in our yard, yet every spring I am greeted by beautiful purple blossoms several places along my drive to work.

And every spring, I snap photos from the window of my truck and promise myself that I am going to stop one day and take a close up.

So, on the last Sunday in March as I drove home from lunch with Bri, I did just that. Hopped a muddy ditch just off of 290 in Waller to capture the fleeting beauty of wisteria. 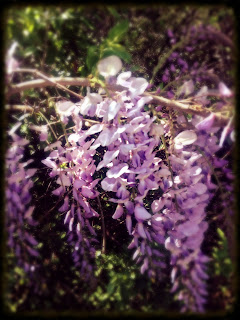 I am so glad I took the moment to capture its glory and to breath deeply of the scent...because just a few days later these lovely petals were washed away in a thunderstorm.

What beauty surrounds you today? Take the time to really notice it...and to enjoy it.

- Posted using BlogPress from my iPad
Posted by Fonda at 10:05 PM 1 comments

What a Difference a Day Makes

Yesterday was a Monday.

You know, THAT kind of Monday.

Papers literally disappearing from my desk. Vendors emailing to ask why I had sent money, even though I held their invoice in my hand. Others questioning where checks were that we mailed in February...even though the other one mailed at the exact same time to the exact same address had arrived long ago. My day just seemed to be spiraling out of control with one problem after another.

And so it was that on Easter Monday, I found myself nearly pulling at my hair and begging The Lord for a piece of Sabbath (and a peace of Sabbath).

Just an hour or two alone.

Just a bit of silence that I might hear Him and find myself.

But it wasn't to be. I had errands to run on my way home. A trip to the grocery store to make. A package to deliver to William. Guests at the house when I arrived. Dinner to make (although it ended up being tacquitos). Time spent with my Hero in front of the television and discussing everything that crossed our minds.

I opened my email and found that we were having a package delivered to the house today. I had ordered a bit of rand for our upcoming trip to South Africa. Not much, just enough to buy a soda at the Jo'burg airport or to pay for lunch on our journey to Polokwane. Pocket change really. We learned during our last trip that you want to have a bit of local currency on you when you arrive. The exchange rate at the airport is horrible. And even though most everyone accepts credit cards, there are always those little things that come up.

For this reason, I had gone online Sunday night and placed our order of rand not sure of when it would arrive. The bank will only deliver to the address on the account...so, it was coming here instead of to the office.

And just like that, The Lord gave me a piece of Sabbath.

I don't why I was so surprised that He heard me or that He answered me. But I was.

And I will also admit, that when I actually received that silence to hear Him and find myself...it freaked me out a bit. I was tempted to fill it with laundry and decluttering and Facebook and television and "_________" (fill in the blank).

But in His tenderness, He met me right where I was.

He sent a message that I needed to hear through my devotional reading.

He revealed my fear of being alone with Him...and my own thoughts.

He wooed me to sit out on the deck listening to the birds and to finish reading "The Rest of God" by Mark Buchanan -- where He spoke to me again of Jacob's wrestling with God.

He reminded me of a broken commitment to read through the New Testament and met me so sweetly in the words of the apostle John.

And then He moved me here, to share with you and to record for my forgetful self that He not only meets our needs but He does exceedingly abundantly above all that we ask or think.

What are you asking Him for today? He's listening!
- Posted using BlogPress from my iPad

What I did: (Warning -- March is a CRAZY BUSY month around here!)

What I listened to:

I know this is really late, but we are without Internet at home again and work has been so busy that I hadn't taken the time to update on the last few events of March.  I would love to hear what is going on in your life today.
Posted by Fonda at 5:44 PM 1 comments